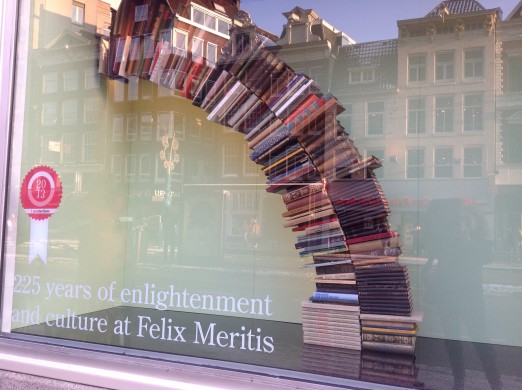 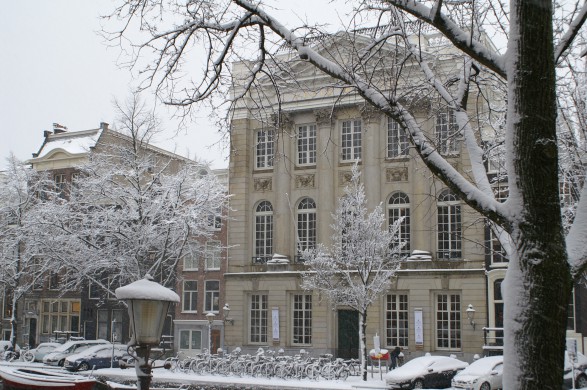 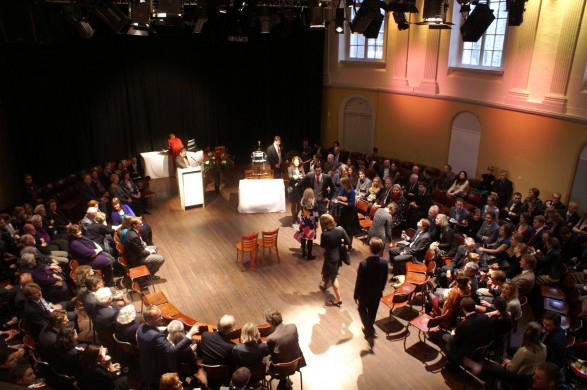 A century ago, in 1916, a group of international artists, writers, exiles and free-thinkers founded Cabaret Voltaire at Spiegelgasse 1 in Zurich, not far from the residence where Lenin was preparing the Russian Revolution. The name of the cabaret referred to the French philosopher Voltaire, whose critique of the status quo led first to his incarceration in the Bastille and later to two years of exile in England. Cabaret Voltaire was a kind of club. Some 150 years earlier, clubs and societies sprang up all over Europe during the Enlightenment. Felix Meritis is one of them.

The founders of the cabaret were equally opposed to the bourgeois conception of art and life. They refused to serve in a war they did not believe in, and called their movement Dada. Hugo Ball rented a room in the Meirei (Dairy Inn) in the Spiegelgasse by convincing the owner of the premises, the former Dutch mariner Jan Ephraim, that a literary cabaret would be bound to increase his sales of beer. Ball’s main partners were his wife Emmy Hennings, Hans Richter, Hans Arp, Marcel Janco, Richard Huelsenbeck, and Tristan Tzara. Cabaret Voltaire, a mixture of different artistic forms and engagement, only lasted two years, but the ideas of Dada spread as a rapidly growing and creative network in Europe and New York.

Cabaret Voltaire was a kind of club, but it was certainly not unprecedented. Some 150 years earlier, clubs and societies of various sizes sprang up all over Europe during the Enlightenment. The Netherlands was no exception: the so-called Dutch Enlightenment led to the setting up of many societies to promote the arts and sciences. These public areas also functioned as bars and clubs. Scientific debates, critiques of social relations, and the discussion of traditional claims to authority were to lead to knowledge of universal values, thereby promoting the development of civil society.

Some forty prominent citizens of Amsterdam launched the Felix Meritis (Happy through Services) society in 1777. These founding fathers supported activities in the field of culture and science. In the year of the society’s foundation, Holland was ruled by Stadholder Willem V and his wife Wilhelmina of Prussia. It was a turbulent period.

The country was involved in the English war from 1780 to 1784, and maritime travel was at a standstill. Party conflicts between supporters of the House of Orange and revolutionary ‘Patriots’ ended up in riots, especially in Amsterdam, where most of the Patriots lived. The year 1787, when the new Felix Meritis building at Keizersgracht 324 opened its doors, the Prussian army stepped in. The Patriots fled to France on the eve of the French Revolution.

Ever since its inception, the many departments of Felix Meritis (music, commerce, drawing, physics, literature) have made it an avant-garde hothouse: at first its concert hall was the only international venue for the newly composed music of the day. Felix Meritis was a meeting place from the very first. Anyone who visited Amsterdam spent an evening there, and it often featured in the travel accounts and biographies of famous foreign visitors. Sooner of later, anyone of any importance ended up there as a guest or as a visitor, from King Louis Napoleon (honorary member), King Willem I (patron of the society), Clara Schumann, Brahms, Schubert and Schopenhauer to Peter Sloterdijk, Alicja Geschinska and Alessandro Barrico,

Voltaire himself was unable to visit Felix Meritis, as he died in 1778. Nevertheless, the (possibly apocryphal) aphorism attributed to him, ‘‘I disagree with everything you say, but I shall continue to fight for your right to say it”, is often quoted. The freedom of speech and dialogue that was one of the ideals of the Dutch Enlightenment is still a highly topical theme today.

Cabaret Voltaire was relaunched with financial support from the Swiss watch company Swatch and the city of Zurich. The building reopened its doors in September 2004 as a monument to a historical period and as a contemporary cultural centre. It may be mere coincidence, but it was a clockmaker, Willem Writs, who took the initiative of setting up the Felix Meritis society at the end of the eighteenth century. The Felix Meritis Society celebrated its 225th anniversary in 2013.

Voltaire was given a warm welcome in the Netherlands. He wrote: ‘All you see here are meadows, canals and greenery. It is an earthly paradise from The Hague to Amsterdam. I would have liked to spend the rest of my days in this country. Here there is no need to fear the whims, the superstition and the abuse of power of a minister’. We would like to examine whether that still holds good today!

Do culture your way