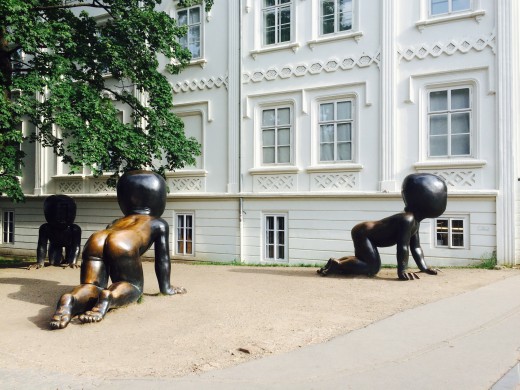 Prague plays host to an incredible range of historical spots, cultural events, there are a lot of galleries and museum, theatres and music halls.

The Charles Bridge, Prague’s historic pedestrian bridge, named after King Charles IV, connects the old town to the Lesser Town and is lined with statues of famous saints and royalty.

The most famous square in Prague is the Wenceslas Square; not only its past is significant, but also its present-day position as a mecca of bars, shops, hotels. The square has been a gathering point for citizens of Prague for over 600 years. Originally built during the reign of Charles IV as the main Prague horse market, the square has become a famous spot of parades and protests over the years, most recently during the Velvet revolution.

The Jubilee Synagogue, since 1918 called the Jerusalem Synagogue because of its location on Jerusalem Street, was built in 1906. The synagogue is designed in Moorish Revival and Art Nouveau.

In the Kafka Museum is an interactive exhibition that takes you through several displays dedicated to the work of the famous German-language writer Franz Kafka and to his life (1883-1924). He was born near the Old Town Square in Prague.

Kafka is best known as writer of Die Verwandlung (The Metamorphosis), first published in 1915 and Der Process (The Trial). His work is characterized by a nightmarish atmosphere (later known as Kafkaesque) in which the bureaucracy is getting a grip on the individual.

In the Museum of Communism you can learn (through photo’s and videos) about what happened under communist rule: authorities arrested more than 200.000 Czechs and killed more than 300 others as they tried to flee across the border.

From Prague you can pay a visit to Pilsen, in 2015 the European Capital of Europe.